​Hyperbaric oxygen therapy (HBOT) is the medical use of oxygen in a pressurized environment, at a level higher than one atmosphere absolute (ATA). Increased pressure allows for oxygen to dissolve and saturate the blood plasma (independent of hemoglobin/red blood cells), which yields a broad variety of positive physiological, biochemical and cellular effects. This noninvasive therapy is the most trusted way to increase oxygen levels to all organs of the body. A typical treatment lasts 60 minutes, during which the client lies down and breathes normally.

BENEFITS OF MILD HYPERBARIC OXYGEN THERAPY (m-HBOT)
One of the key determinants of HBOT is pressure and the greater the pressure, the greater the amount of dissolved oxygen into the body – Note, it does not take much pressure to deliver extra amounts of physiologically-available oxygen. During m-HBOT, the added pressure allows extra oxygen to be absorbed and transferred from the lungs into the blood, causing a greater saturation of blood oxygen levels. As this rich oxygenated blood makes its way to damaged tissue, extra oxygen is now readily available and can be potentially utilized for enhancing tissue repair and regeneration while also still being able to provide its potent anti-inflammatory and anti-bacterial effects. 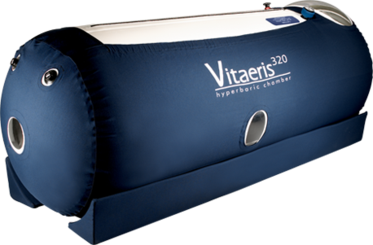 Office Hours
Monday through Friday
10am to 5:30pm